The idea is to produce a series of blog post about each one about a Puppet sub-system.

Before starting, I first want to present what are the various sub-blocks that forms Puppet, or Puppet: the Big Picture: 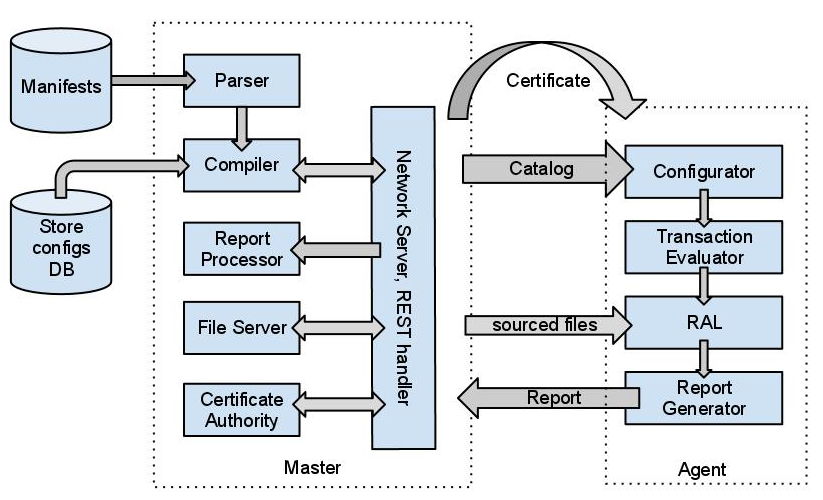 I hope to be able to cover each of those sub-blocks in various posts, but we’ll today focus on the Puppet Parser.

The Puppet Parser responsibility is to transform the textual manifests into a computer usable data structure that could be fed to the compiler to produce the catalog. This data structure is called an AST (Abstract Syntax Tree).

The Puppet Parser is the combination of various different sub-systems:

The purpose of the lexer is to read manifests characters by characters and to produce a stream of tokens. A token is just a symbol (combined with data) that represents a valid part of the Puppet language.

For instance, the lexer is able to find things such (but not limited to):

Let’s take an example and follow what comes out of the lexer when scanning this manifest:

And here is the stream of tokens that is the outcome of the lexer:

As you can see, a puppet token is the combination of a symbol and a hash.

Let’s see how we achieved this result. First you must know that the Puppet lexer is a regex-based system. Each token is defined as a regex (or a stock string). When reading a character, the lexer ‘just’ checks if one of the string or regex can match. If there is one match, the lexer emits the corresponding token.

Let’s take our example manifest (the variable assignment above), and see what happens in the lexer:

The lexer’s scanner doesn’t try every regexes or strings, it does this in a particular order. In short it tries to maximize the length of the matched string, in a word the lexer is greedy. This helps removing ambiguity.

As seen in the token stream above, the lexer associates to each token an hash containing the line number where we found it. This allows error messages in case of parsing error to point to the correct line. It also helps puppetdoc to associate the right comment with the right language structure.

The lexer also supports lexing contexts. Some tokens are valid in some specific contexts only, this is true especially when parsing quoted strings for variables interpolation.

Not all lexed tokens emit tokens for the parser. For instance comments are scanned (and stored in a stack for puppetdoc use), but they don’t produce a token for the parser: they’re skipped.

Finally, the lexer also maintains a stack of the class names it crossed. This is to be able to find the correct fully qualified name of inner classes as seen in the following example:

If you want more information about the lexer, check the Puppet::Parser::Lexer class.

The parser is based on racc. Racc is a ruby port of the good old Yacc. Racc, like Yacc, is what we call a LALR parser.

The ‘cc’ in Racc means ‘compiler of compiler’. It means in fact that the parser is generated from what we call a grammar (and for LALR parsers, even a context free grammar). The generated parser is table driven and consumes tokens one by one. Those kind of parsers are sometimes called Shift/Reduce parsers.

This grammar is written in a language that is a machine readable version of a Backus-Naur Form or “BNF”.

There are different subclasses of context free grammars. Racc works best with LR(1) grammars, which means it must be possible to parse any portion of an input string with just a single token lookahead. Parsers for LR(1) grammars are deterministic. This means that we only need a fixed number of lookahead tokens (in our case 1) and what we already parsed to find what next rule to apply.

Roughly it does the following:

We’ll have a deeper look in the subsequent chapters. Meanwhile if you want to learn everything about LALR Parsers or parsers in general, I highly recommend the Dragon Book

The Puppet Grammar can be found in lib/puppet/parser/grammar.ra in the sources. It is a typical racc/yacc grammar that

Let’s have a look to a bit of the Puppet Grammar to better understand how it works:

So the closer look above shows 4 rules:

To understand what that means, we could translate those rules by:

You can generate yourself the puppet parser by using racc, it’s as simple as:

This rebuilds the lib/puppet/parser/parser.rb file.

You can generate a debug parser that prints everything it does if you use -g command-line switch to racc (check the lib/puppet/parser/makefile and define @@yydebug = true in the parser class.

The parser itself is controlled by the Puppet::Parser::Parser class which is in lib/puppet/parser/parser_support.rb. This class is requiring the generated parser (both share the same ruby class). That means that the ruby blocks in the grammar will be executed in the context of an instance of the Puppet::Parser::Parser class. In other words, you can call from the grammar, methods defined in the parser_support.rb file. That’s the reason we refer to the ast method in the above example. This method just creates an instance of the given class and associates some context to it.

Let’s go back a little bit to the reduce operation. When the parser is reducing, it pops from the stack the reduced tokens and pushes the result to the stack. The result can either be what ends in the result field of the grammar ruby block or the result of the reduction of the mentioned rule (when it’s a non-terminal one).

In the ruby block of a terminal rule, it is possible to access the tokens and rule results currently parsed in the val array. To get back to the assignment statement above, val[0] is the VARIABLE token, and val[2] the result of the reduction of the expression rule.

The AST is the computer model of the parsed manifests. It forms a tree of instances of the AST base class. There are AST classes (all inheriting the AST base class) for every elements of the language. For instance there’s one for puppet classes, for if, case and so on. You’ll find all those in lib/puppet/parser/ast/ directory.

There are two kinds of AST classes:

All AST classes implement the evaluate method which we’ll cover in the compiler article.

For instance when parsing an if/else statement like this:

The whole if/else once parsed will be an instance of Puppet::Parser::AST::IfStatement (which can be found in lib/puppet/parser/ast/ifstatement.rb.

The grammar rule for ifstatement is (I simplified it for the purpose of the article):

Notice how the AST::IfStatement is initialized with the args hash containing the test,statements and else result of the those rules. Those rules result will also be AST classes, and will end up in the IFStatement fields we talked about earlier.

Thus this forms a tree. If you look to the AST::IfStatement#evaluate implementation you’ll see that depending on the result of the evaluation of the @test it will either evaluate @statements or @else.

Calling the evaluate method of the root element of this tree will in chain trigger calling evaluate on children like for the IfStatement example. This process will be explained in details in the compiler article, but that’s essentially how Puppet compiler works.

An Example Step by Step

Let’s see an end-to-end example of parsing a simple manifest:

This will produce the following stream of tokens:

And now let’s dive in the parser events (I simplified the outcome because the Puppet grammar is a little bit more complex than necessary for this article). The following example shows all actions of the Parser and how looks the parser stack after the operation took place. I elided some of the stacks when not strictly needed to understand what happened.

And the parsing is now over. What is returned is this program, which is in fact an instance of an AST::ASTArray.

If we now analyze the produced AST, we find:

What’s important to understand is that the AST depends only from the manifests. Thus the Puppet master needs only to reparse manifests only if they change.

The next episode will follow-up after the Parser: the compilation. The Puppet compiler takes the AST, injects into it the facts and gets what we call a catalog; that’s exactly what we’ll learn in the next article (sorry, no ETA yet).

And happy new year all!