I decided this week-end to try the more popular puppet master stacks and benchmark them with puppet-load (which is a tool I wrote to simulate concurrent clients).

My idea was to check the common stacks and see which one would deliver the best concurrency. This article is a follow-up of my previous post about puppet-load and puppet master benchmarking

I decided to try the following stacks:

The setup is the following:

To recap, m1.large instances are:

All the benchmarks were run on the same instance couples to prevent skew in the numbers.

The master uses my own production manifests, consisting of about 100 modules. The node for which we’ll compile a catalog contains 1902 resources exactly (which makes it a big catalog).

There is no storeconfigs involved at all (this was to reduce setup complexity).

The methodology is to setup the various stacks on the master instance and run puppet-load on the client instance. To ensure everything is hot on the master, a first run of the benchmark is run at full concurrency first. Then multiple run of puppet-load are performed simulating an increasing number of clients. This pre-heat phase also make sure the manifests are already parsed and no I/O is involved.

Tuning has been done as best as I could on all stacks. And care was taken for the master instance to never swap (all the benchmarks involved consumed about 4GiB of RAM or less).

Essentially a puppet master compiling catalog is a CPU bound process (that’s not because a master speaks HTTP than its workload is a webserver workload). That means during the compilation phase of a client connection, you can be guaranteed that puppet will consume 100% of a CPU core.

Which essentially means that there is usually little benefit of using more puppet master processes than CPU cores on a server.

A little bit of scaling math

When we want to scale a puppet master server, there is a rough computation that allows us to see how it will work.

Here are the elements of our problem:

That’s about a new client checking-in about every seconds.

Since we have 8 CPU, that means we can accommodate 8 catalogs compilation in parallel, not more (because CPU time is a finite quantity).

Since our catalogs take about 10s to compile (in my example), we’re clearly in trouble and we would need to either add more master servers or increase our client sleep time (or not compile catalogs, but that’s another story).

For setups that requires a fixed number of workers (Passenger, Mongrel) those were setup with 25 puppet master workers. This was fitting in the available RAM.

For JRuby, I had to use the at the time of writing jruby-head because of a bug in 1.6.5.1. I also had to comment out the Puppet execution system (in lib/puppet/util.rb).

Normally this sub-system is in use only on clients, but when the master loads the types it knows for validation, it also autoloads the providers. Those are checking if some support commands are available by trying to execute them (yes I’m talking to you rpm and yum providers).

I also had to comment out when puppet tries to become the puppet user, because that’s not supported under JRuby.

JRuby was run with Sun java 1.6.0_26, so it couldn’t benefit from the invokedynamic work that went into Java 1.7. I fully expect this feature to improve the performances dramatically.

The main metric I’m using to compare stacks is the TPS (transaction per seconds). This is in fact the number of catalogs a master stack can compile in one second. The higher the better. Since compiling a catalog on our server takes about 12s, we have TPS numbers less than 1.

Here are the main results: 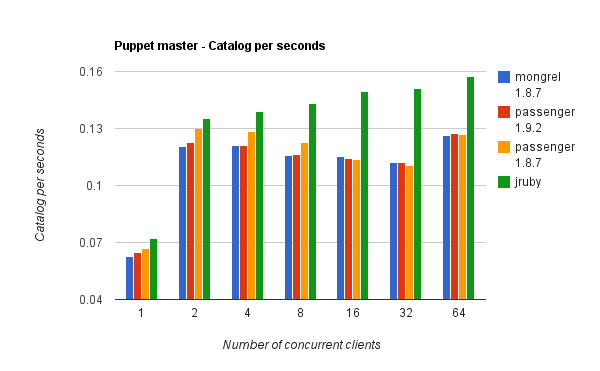 And, here is the failure rate: 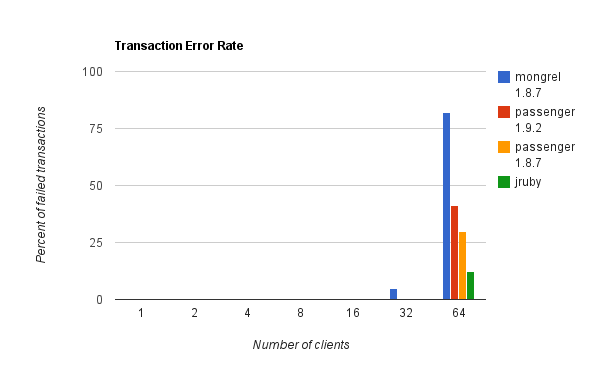 First notice that some of the stack exhibited failures at high concurrency. The errors I could observe were clients timeouts., even tough I configured a large client side timeout (around 10 minutes). This is what happens when too many clients connect at the same time. Everything slows down until the client times out.

In this graph, I plotted the min, average, median and max time of compilation for a concurrency of 16 clients. 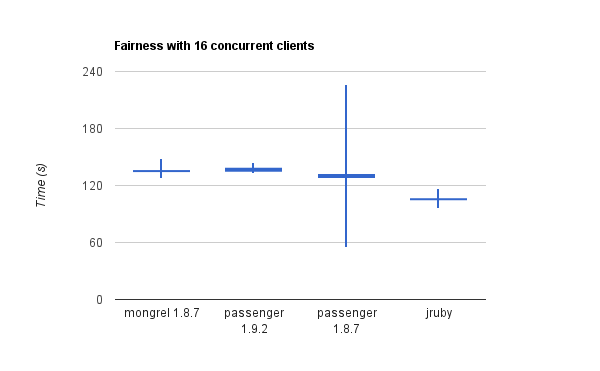 Of course, the better is when min and max are almost the same.

Digging into the number of workers

For the stacks that supports a configurable number of workers (mongrel and passenger), I wanted to check what impact it could have. I strongly believe that there’s no reason to use a large number (compared to I/O bound workloads). 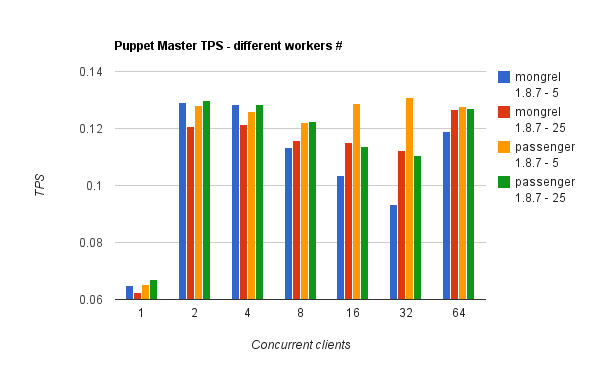 Beside being fun this project shows why Passenger is still the best stack to run Puppet. JRuby shows some great hopes, but I had to massage the Puppet codebase to make it run (I might publish the patches later).

That’d would be really awesome if we could settle on a corpus of manifests to allow comparing benchmark results between Puppet users. Anyone want to try to fix this?