Update 1: I’ve finished the second part of the serie

Update 2: The plate I’m using has a height of 1.5mm, not 2.5mm as some astute readers have pointed out.

So 7 months ago, I was browsing the Internet when I discovered a new world: there were passionate people that are building their keyboards and even programming them with QMK.

I soon was embarked in a no return journey to find the perfect keyboard, made of custom keyboards purchased from Korean Group Buys, properly prepared keyboard switches, custom color keycaps, split backspace layouts…

Forward to a month ago, I discovered that some people were building their own keyboards without any PCB, I then decided to try following the best handwiring guide with one of the smallest existing keyboard.

This serie of posts is the story behind this keyboard: 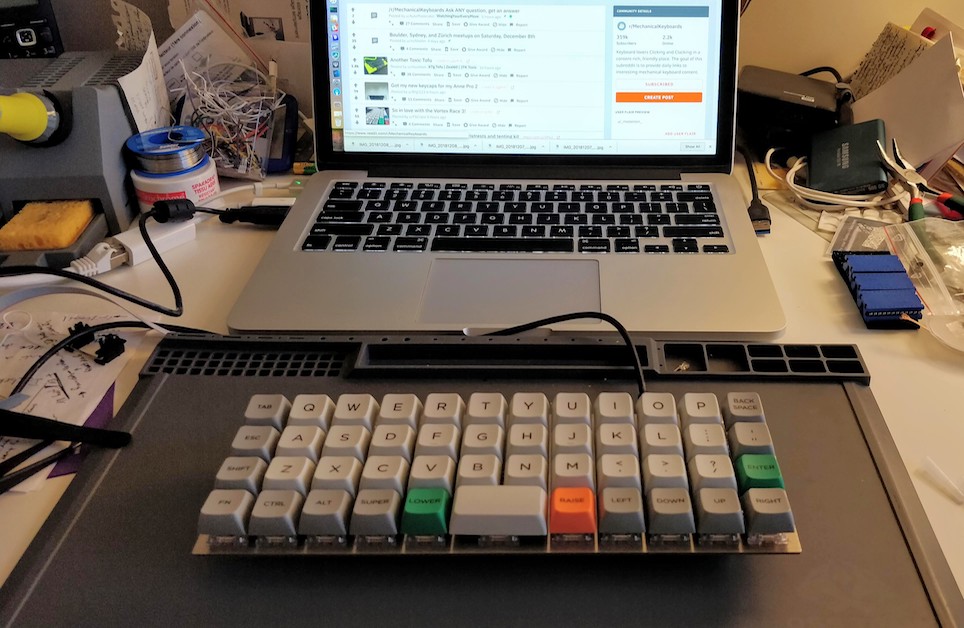 A keyboard if the combination of the following elements:

So in a very fast loop, the controller’s firmware will power on one column of the matrix and “read” the tension back on the matrix rows. If there’s some tension on one row given current on a column, then the controller can deduce which switch has been pressed. The firmware will then send the corresponding keycode based on the layout to the USB port, and continue with the next column and so on infinitely.

But there’s a problem: if one presses more than one key at a time, it is possible for the controller to register ghost keypresses. See the following schema: 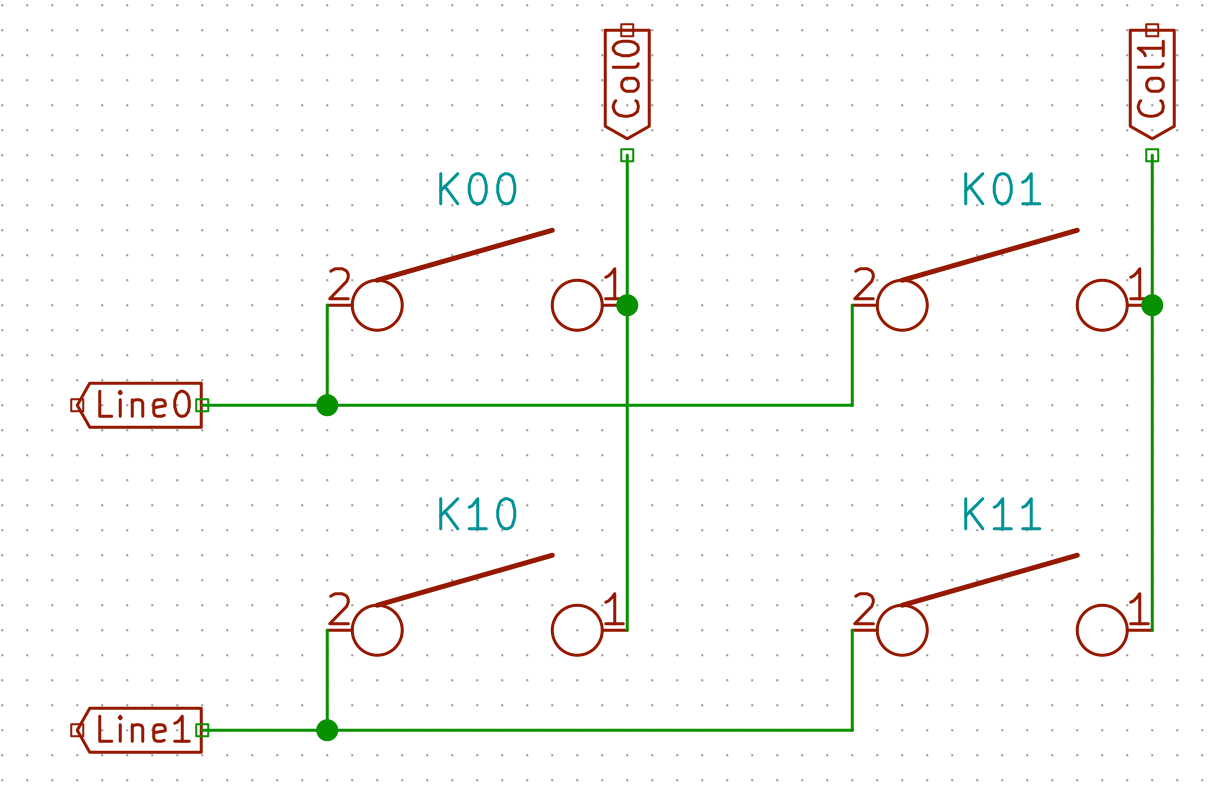 To prevent this we add diodes between the switch and the row it is connected to: 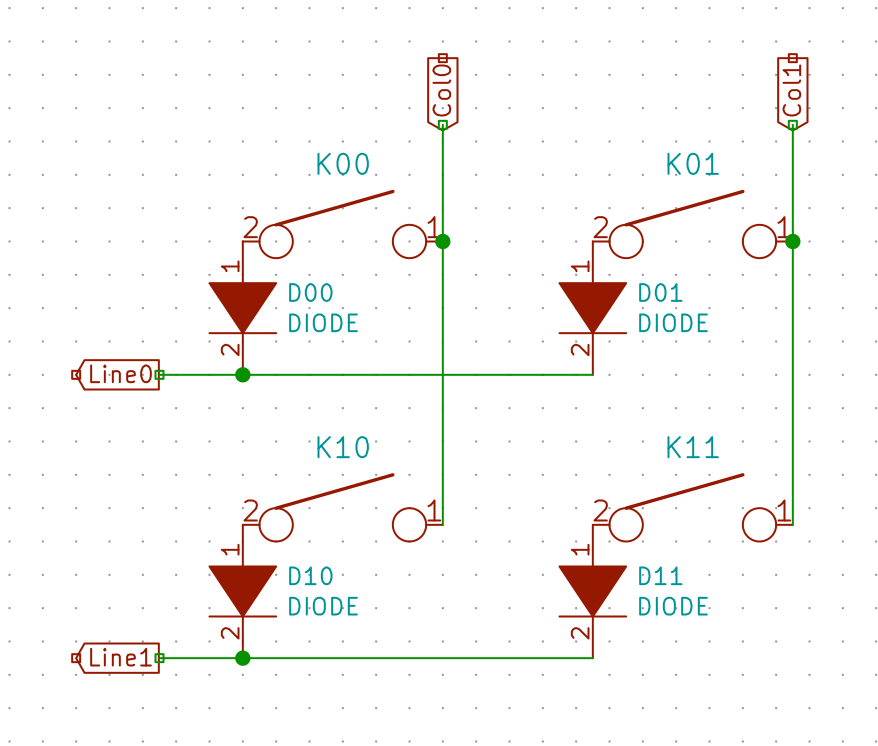 Handwiring as its name implies is an electronic technique of building electronic circuits without using a PCB, and instead wiring all components one by one manually with small electric wires. It is often used to perform prototype of electronic boards.

The aim of this build log is to show how to wire a fully working (but small) keyboard.

We’re going to build a Planck like keyboard in MIT layout, that is a matrix of 4x12, with a 2u spacebar, accounting for 47 keys. I chose this keyboard and layout because it’s one of the smaller keyboard (a 40%) and it is ortholinear (all switches are aligned) making it easy to wire.

So what will we need to build our keyboard:

The most important part is the insulator stripper: 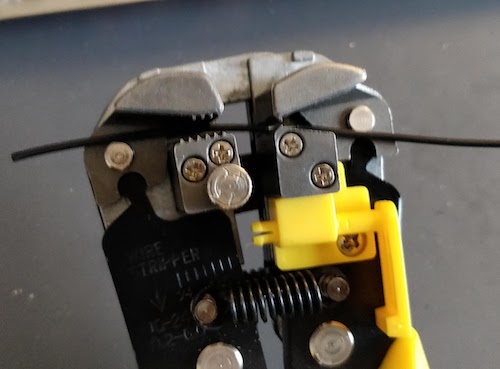 You can get a Vise Grip or any other tool like this one. You might need to tune it’s strength (there’s usually a small knob on the tool) so that it doesn’t cut the small wires.

In this part of the story, we’ll only need the wire stripper, some colored wires, the plate, 47 switches, tweezers, a multimeter, the wire cutter, solder and the soldering station.

The very first step of our handwiring work is to firmly clips the switches on the plate: 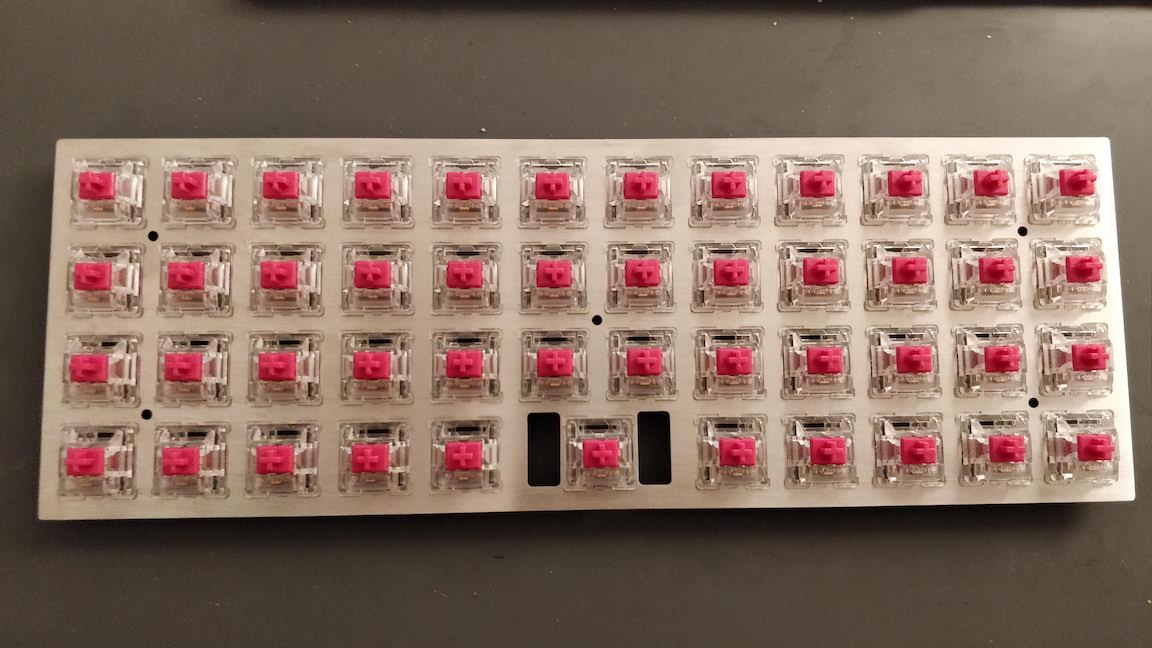 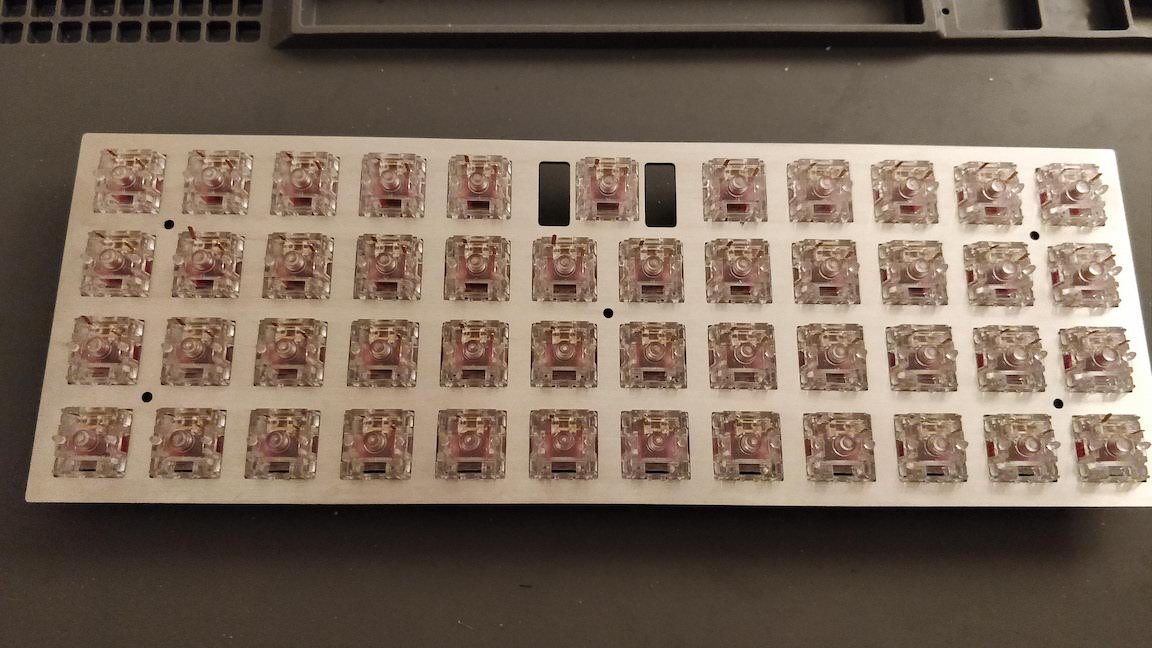 I put the switches facing north (the led hole is at the top) so that the higher pins when seen from the back of the plate will be the pin connected to the rows, and the other one will be connected to the columns.

With a 2.5mm plate, the switches should clipse correctly on it. Make sure the plate is using MX switch holes without “top-opening” punches (straight square holes).

We’ll have to solder the diodes on the switch pin connected to a row. Since there’s no circuit copper pads to put the solder on like on a PCB, the best way to solder something on a pin is to form a small wire loop and put solder on it. The solder will “flow” between the pin and the loop and stick firmly.

So our first task is to form a small loop with one of the leg of the diodes. Make sure to do it on the correct leg: the one opposite to the diode black mark: 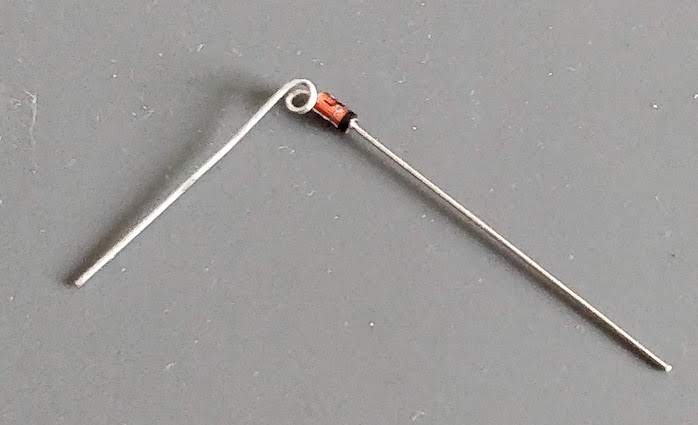 To ease the process and especially if you got your diodes in bands, you can bend them all in one shot on your desk table like this: 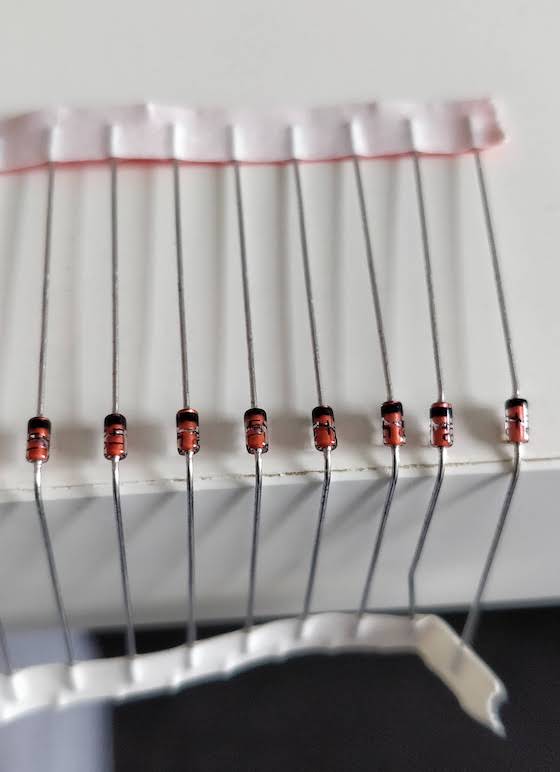 Repeat this for the other 46 diodes.

After this you can cut the extraneous diode leg just after the loop: 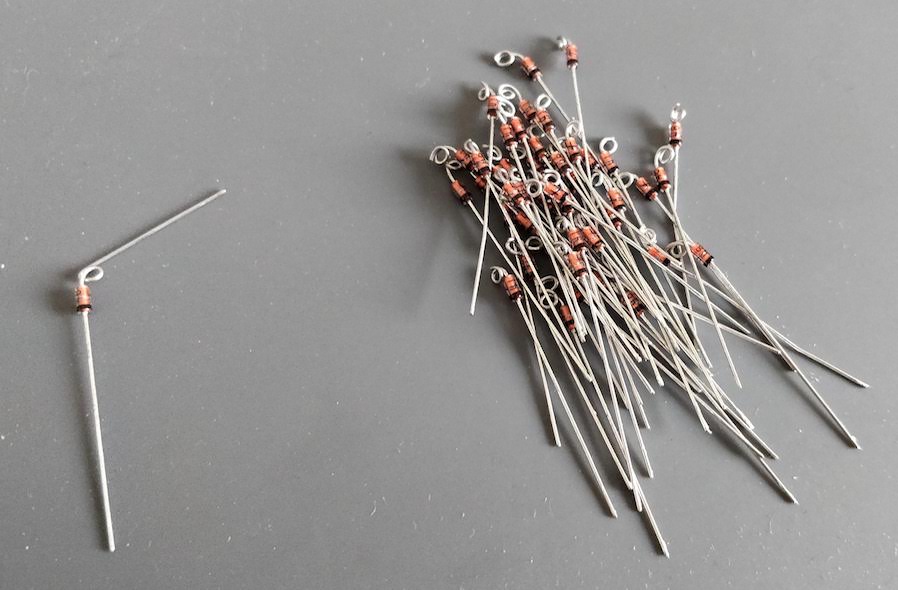 The very next step is to place the diode loops on each of the switch row pins: 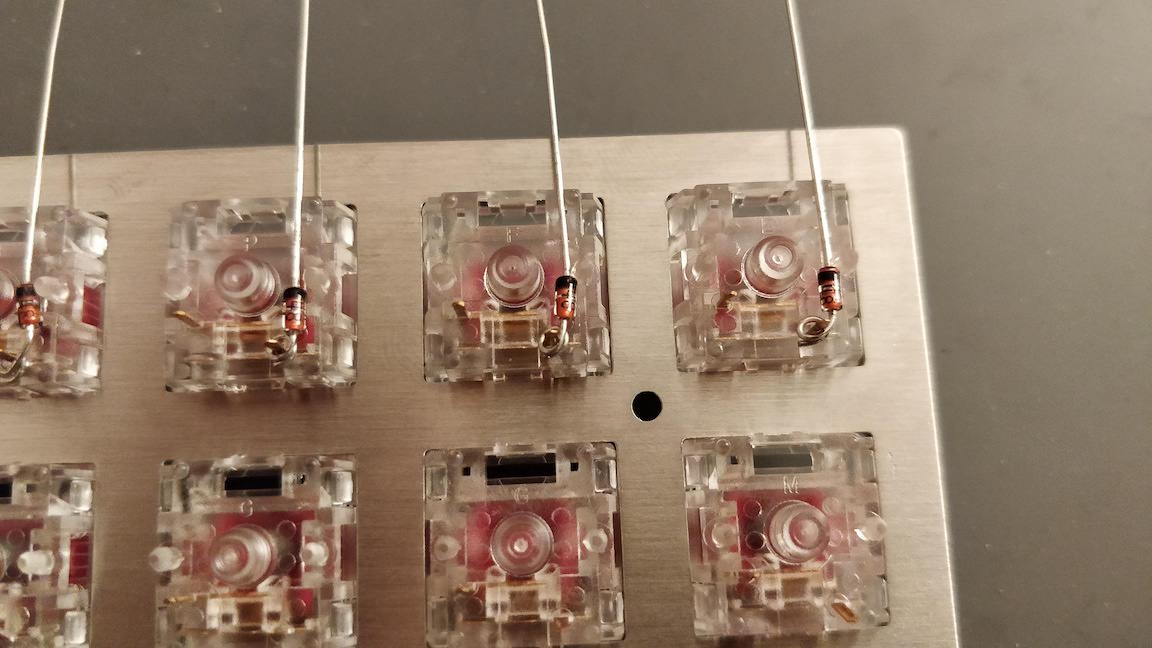 And then soldering them:

Make sure to orient correctly the diodes and leave the other leg correctly aligned.

Notice that I started placing and soldering the diodes from the top row (as seen from the back) so that the other rows diodes long legs doesn’t hinder soldering the next row. 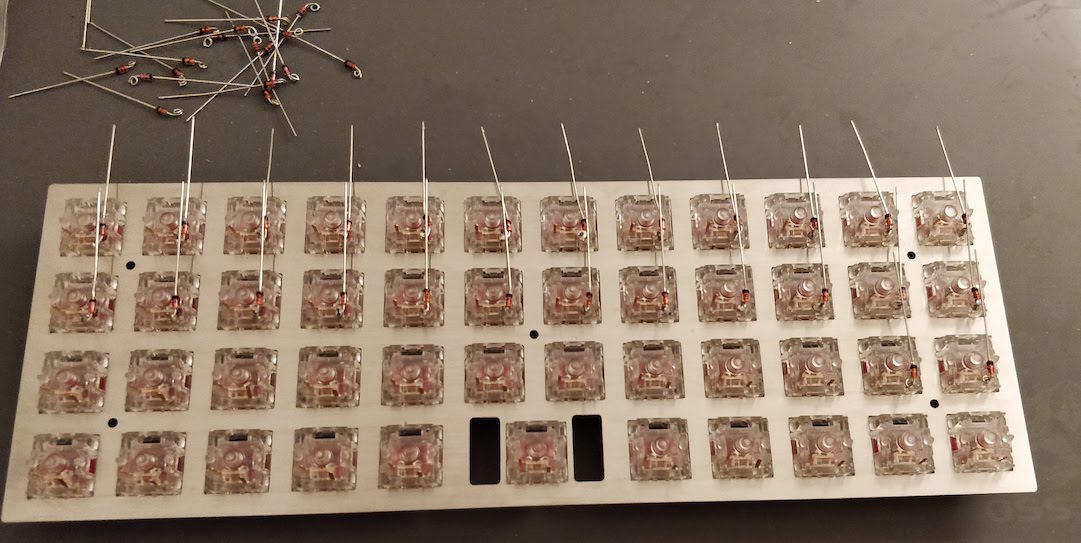 We’ll then keep adding diodes and soldering them until we’ve covered all switches: 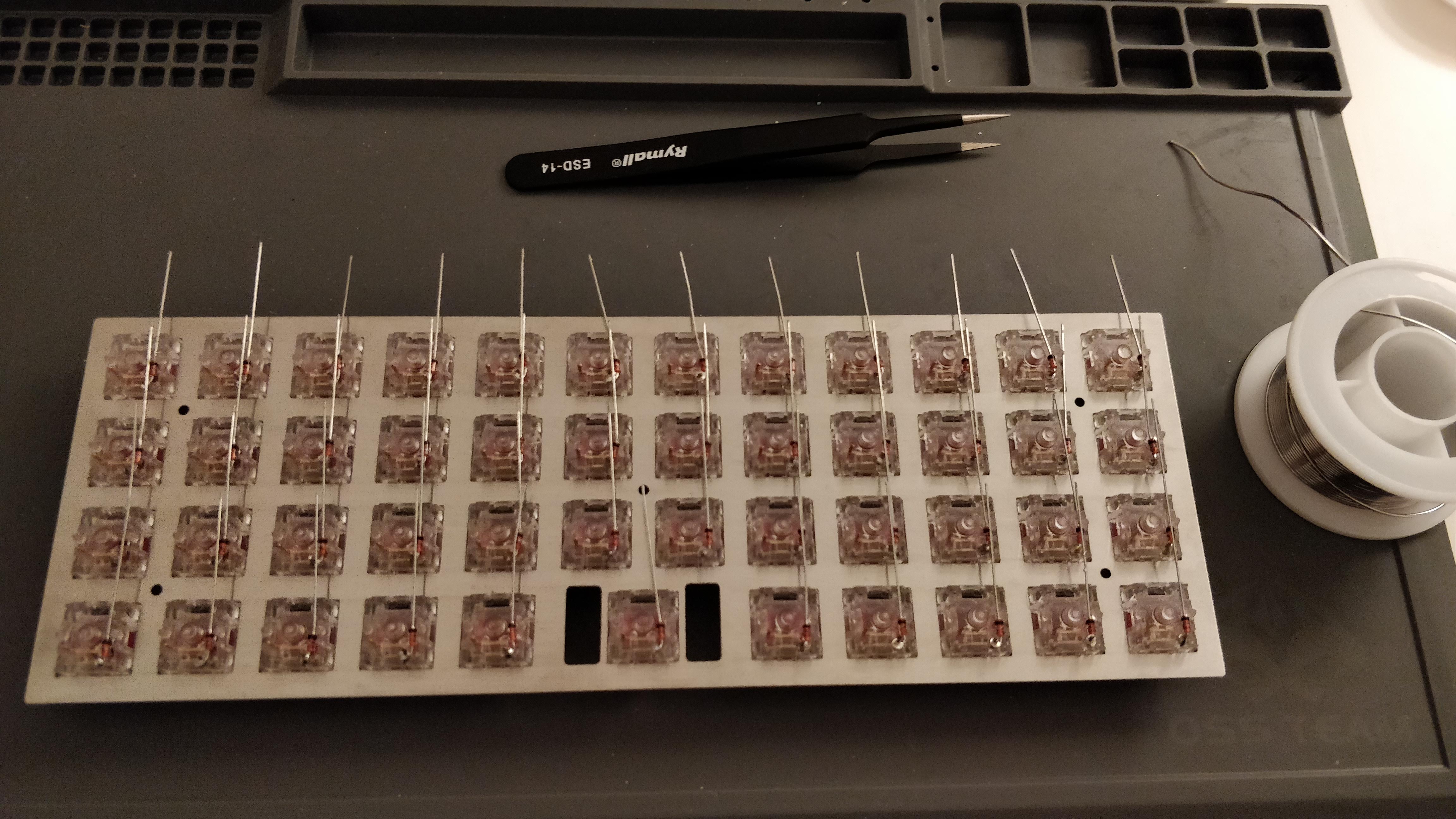 It is important to not cut the remaining leg yet. We’ll use it to connect to the row wire as you’ll find in the next step.

To build the rows, we’ll take a long piece of wire (I used black wire). The first thing to do is to remove the insulator at the loose end on something like 5cm with the wire stripper.

We know that we have 12 switches on a row (except the bottom one which has only 11 switches). There is 19mm between two switches.

To solder the wire, we’re going to bend the diode leg around the cable to form a half loop and solder between the insulator pieces. At the same time secure the row wire with the switch central bumps.

We’ll start by soldering the loose end on the first diode, then proceed to the next diode: push the insulator piece toward the first junction, solder and move back the insulator at equal distance: 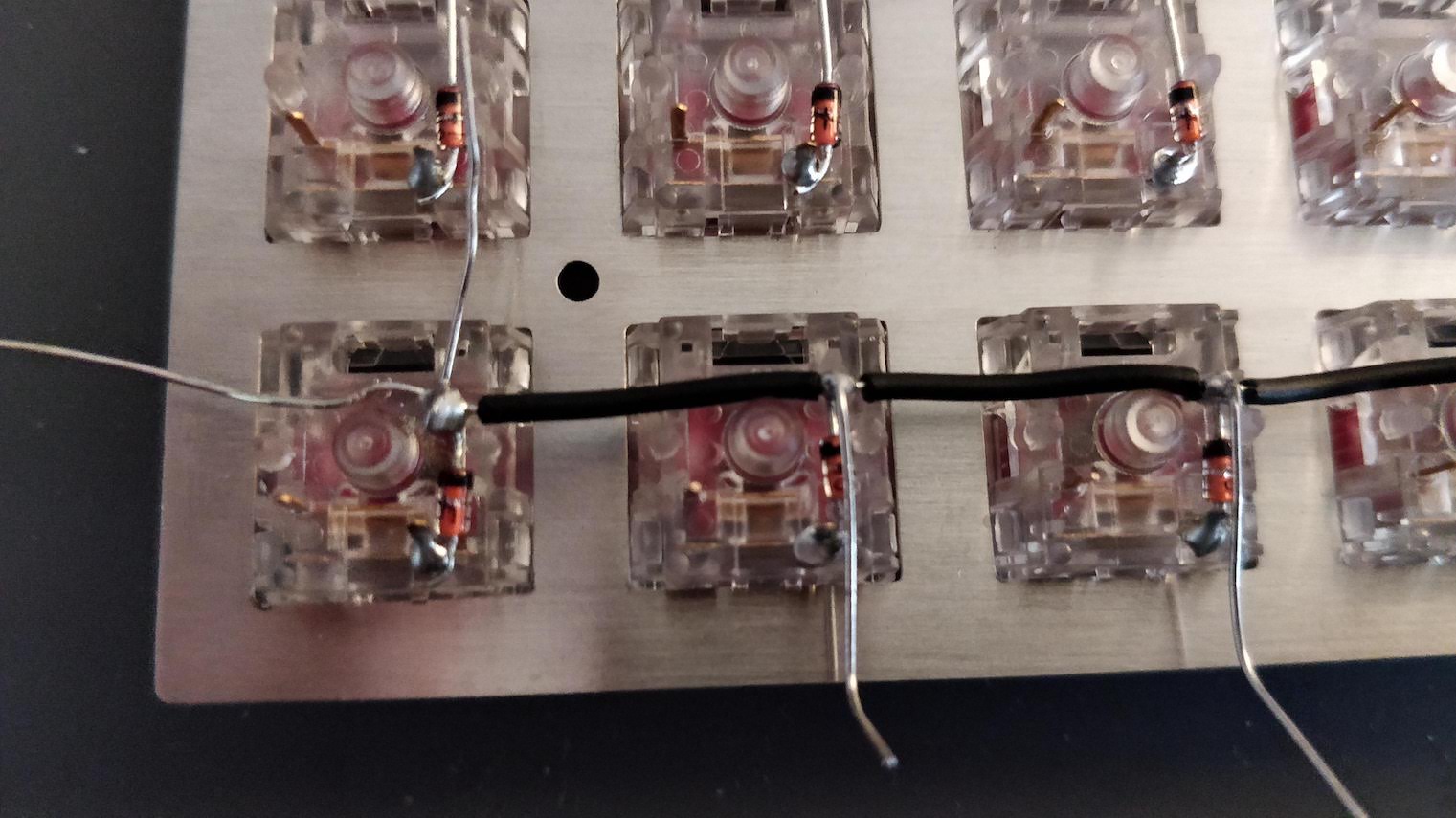 For the first diode, I formed a complete loop with the leg around the wire. For the subsequent diode since it is not practical to do that, I’ve done only half loops. 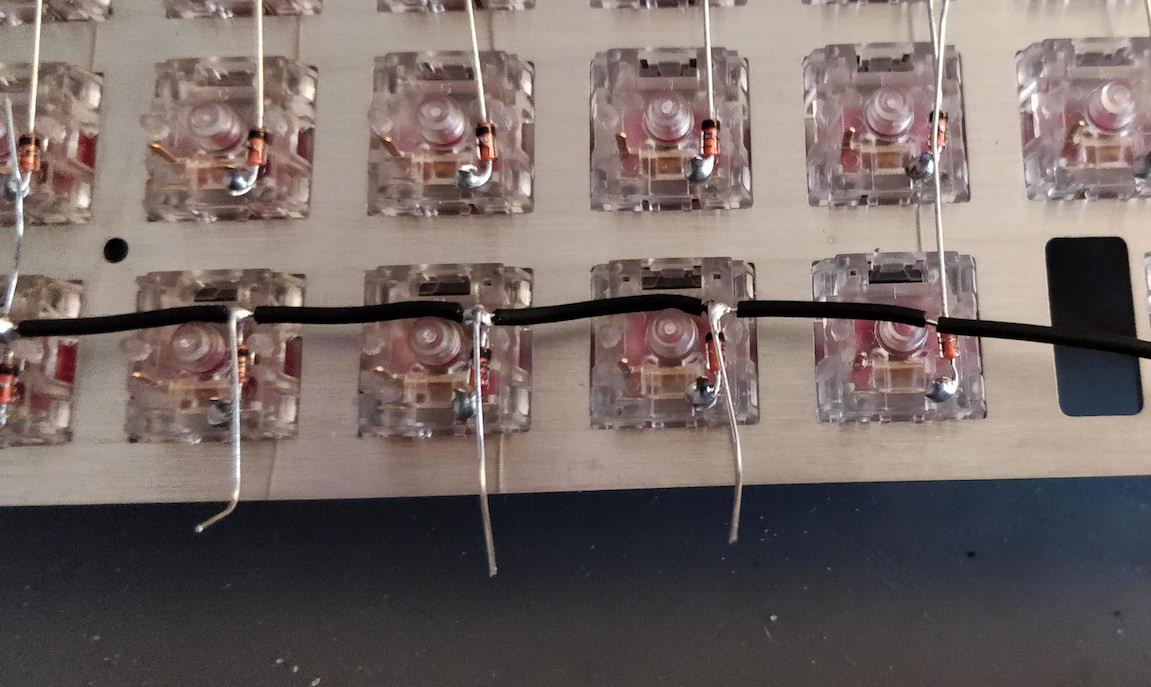 Another option which I used at first is to cut the insulator with the wire stripper on each step instead of cutting the 11 pieces at once. So solder one diode leg, cut the insulator at the right lenght, push it toward the last soldered diode, solder the next one, and so on. This is more effective if the distance between switches is variable, otherwise use the first method.

The last diode in the row should also be soldered by forming a full loop with the diode leg around the wire.

It is important to solder the diode leg on the wire before moving to the next diode leg along the row, otherwise the cable could move during the process and nothing would be correctly aligned.

Cut the extraneous wire at both ends and all the remaining legs with the wire cutter and you should obtain something like this: 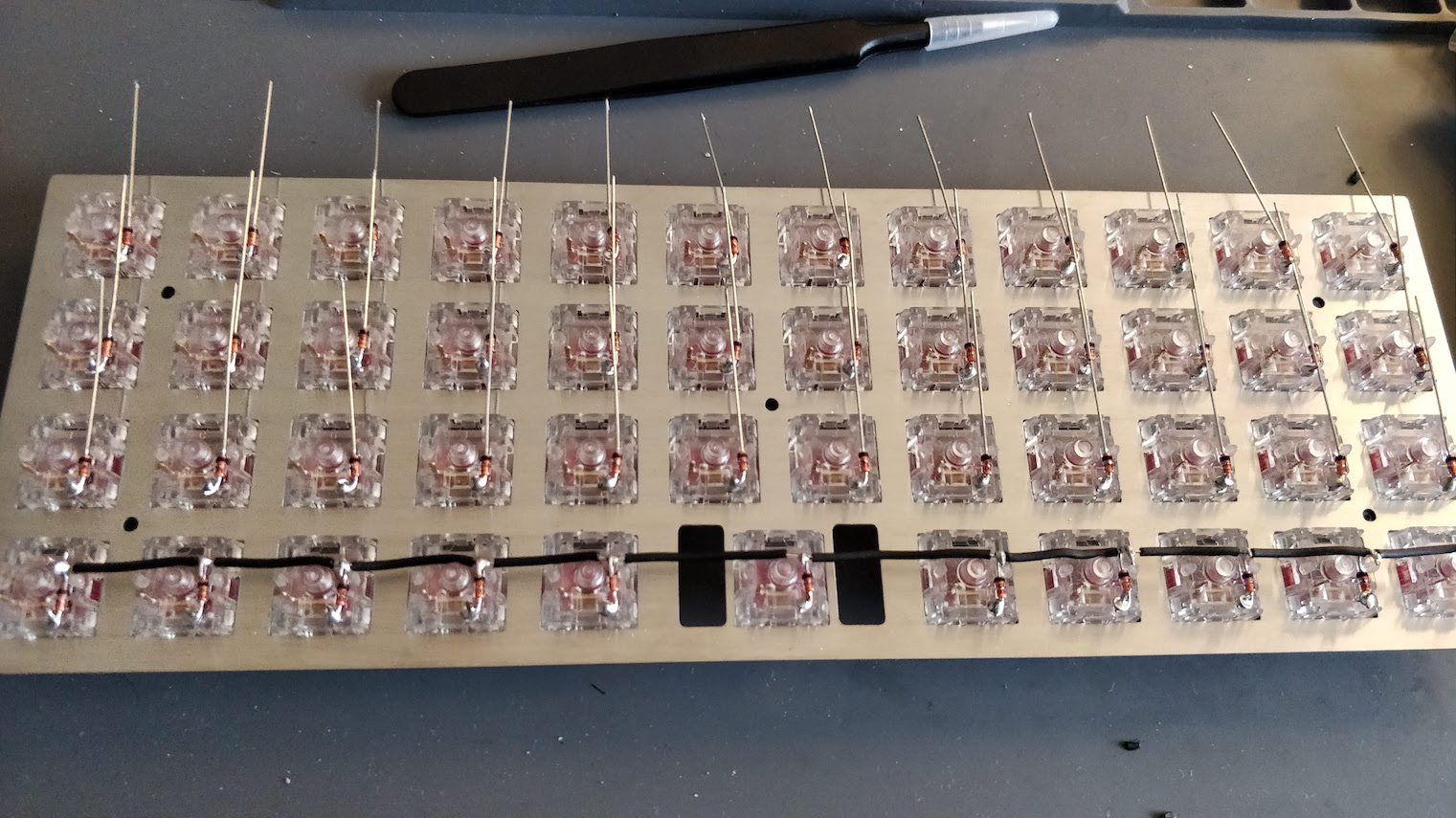 Apply the same technique to the 3 remaining rows. It takes around 10 minutes to solder a 12 switches row: 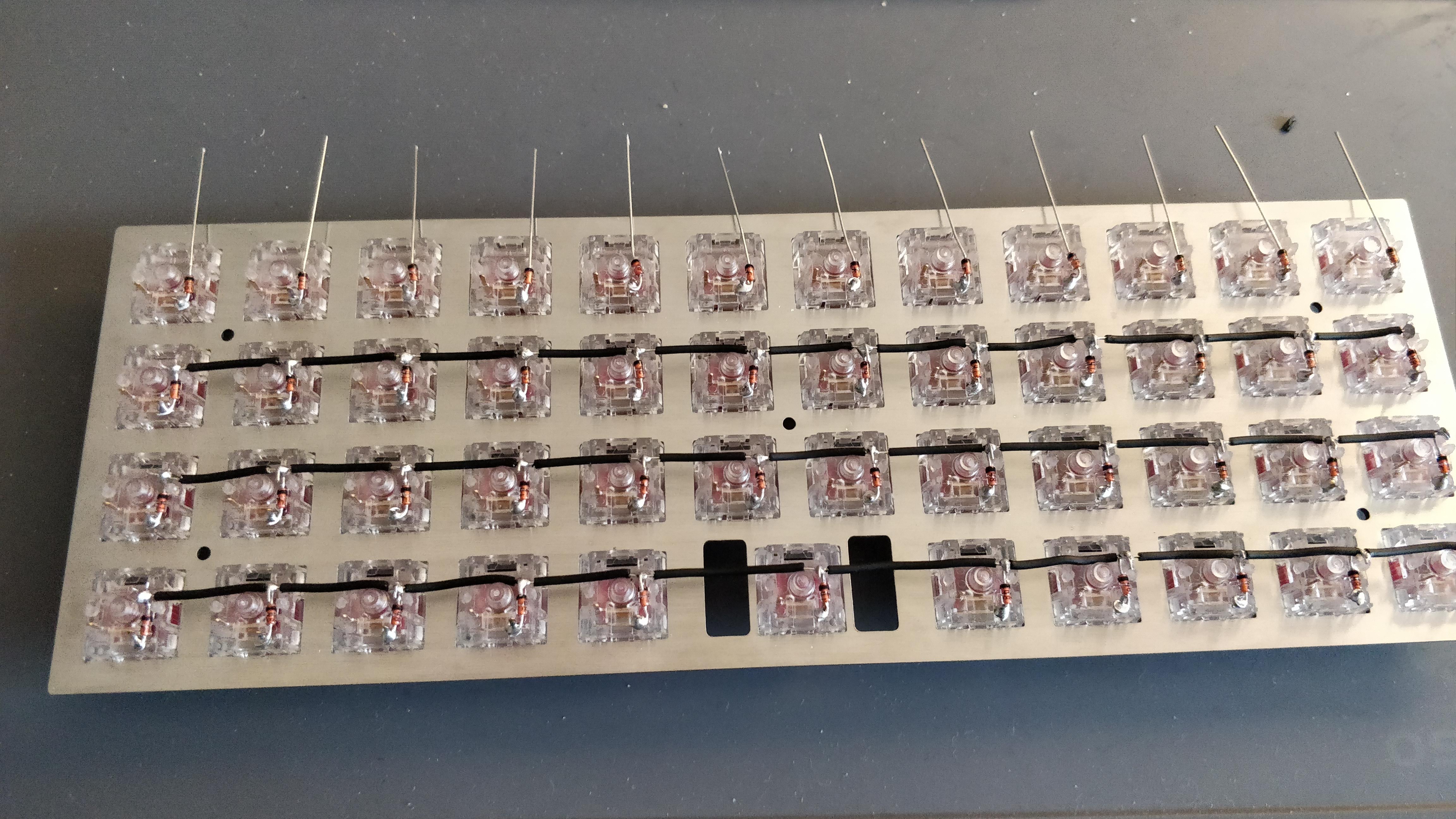 Once you’ve made sure everything works electrically, it is time to move to the columns wiring.

We’ll use the exact same technique as for the rows, except that we need to split the insulator into only 3 pieces of equal length (there are only 4 rows on this keyboard). To make sure we have enough wire, I didn’t cut it before soldering the last switch in a column.

Since we don’t have the diodes leg to form a loop around the wire, we’ll build loops with the wire around the switch pins: 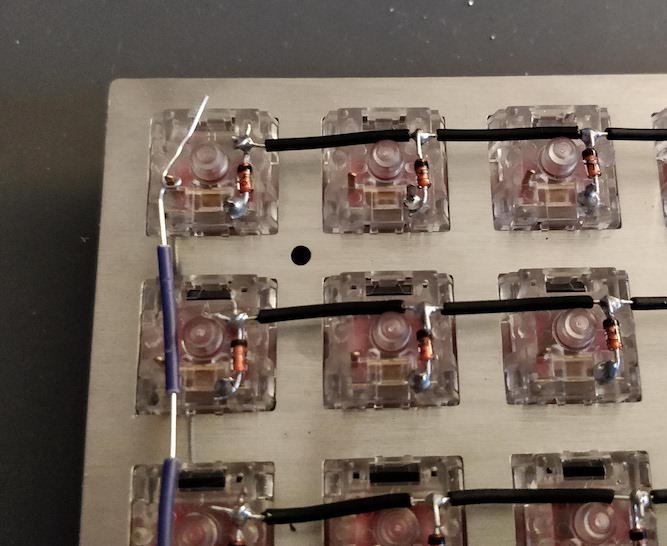 Once soldered we can move to the next switch, push back the insulator toward the previous switch, solder the current one and so on: 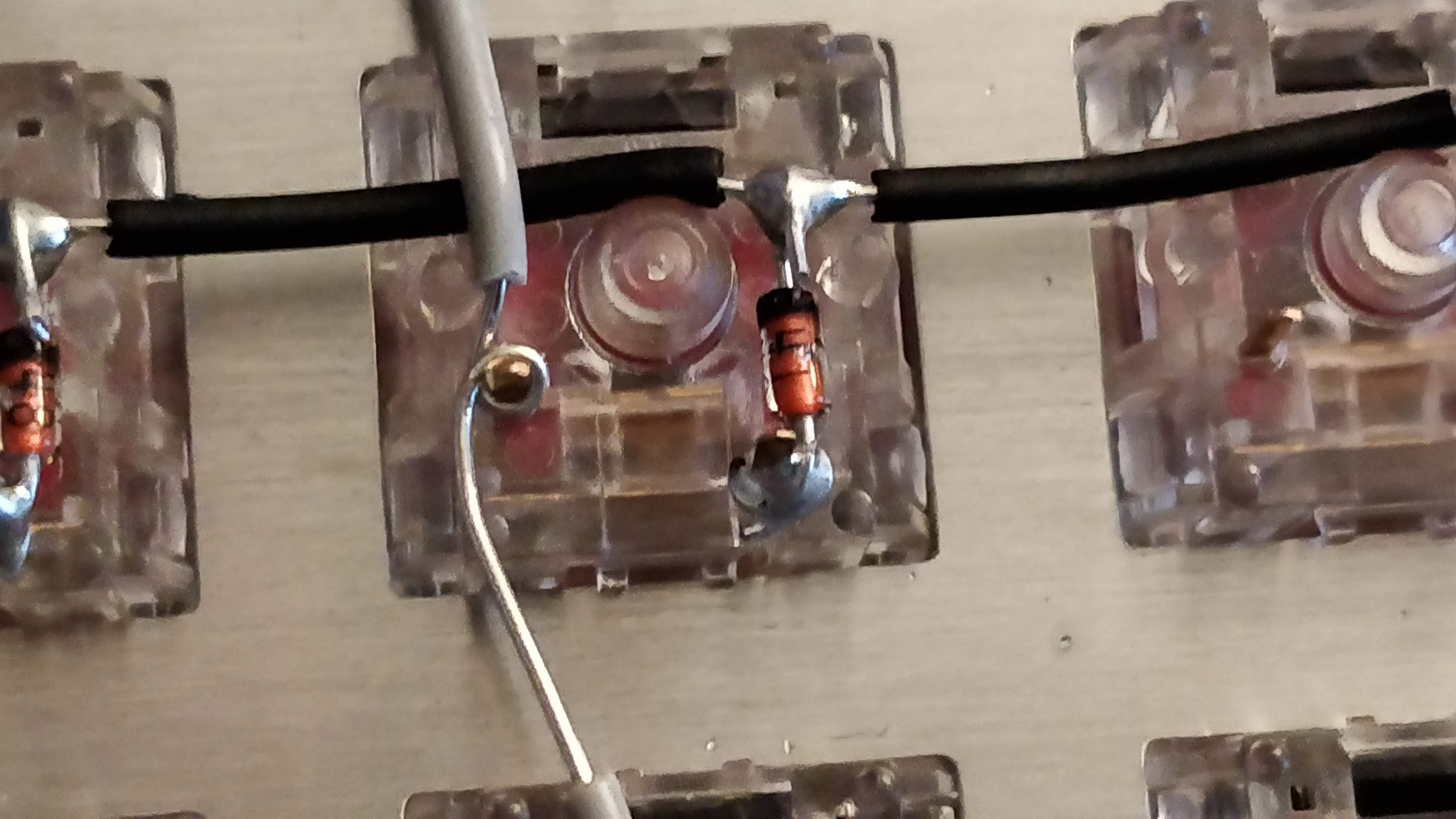 Keep doing this until you’ve done all columns. It takes only a few minute per columns once we get the habit.

Since there are only 11 switches on the bottom row, one of the column will span only 3 switches.

You can then use the multimeter to check the colums are correctly wired, and that no rows is electrically connected to a column.

Another part will explain how I’m going to build a bottom plate for the keyboard.